Nothing that I'm going to write in this post is profound or new - but I find it weighing so heavily on me that I wanted to write about it somewhere, and the site that I've finally created to put some of my artwork on seemed appropriate.

Whenever I create any sort of artwork I always get stuck on the thought of 'now what' when it comes to finishing a drawing, photograph, sculpture, whatever.  When I was still living at home with my parents this was not a problem: we had a large basement with a lot of storage room, and we had another basement in a building in town that we could store things in as well.  As a result, 'what am I going to do with this next' was never really a big issue: it was going to be stored: I didn't think much more about it after that.  There were certainly things that I gave away in hopes that the people I gave them to would display them or somehow have them become a part of their lives, but in general there wasn't much to worry about.  That was high school and most of college.

Towards the end of the college I became a bit of an iconoclast.  My last semester of photography I only turned in two prints for the entire semester: and they were simply photographic documentation of my BFA show which was an installation of my dorm room that I built in the art gallery and lived in for two weeks.  It may have been the most interesting and enjoyable two weeks of my entire college career.  Aside from my BFA show piece (called simply 'Life') I did a number of other performance/installation pieces for my Advanced Photography class in place of actual photographs.  I simply believed that I was creating living photographs that didn't need to have the element of silver gelatin to validate them.

I started seminary as a full iconoclast.  I didn't bring much of my artwork to my apartment there, and I really had no interest in doing much artwork anything.  When I was applying for seminary my pastor at the time had asked me why the switch in topic: from studying visual art to studying theology, biblical studies, etc.  I explained that I wasn't really looking for a job in ministry but that I really wanted to just go to learn.  He pushed me a little more though and asked me very specifically about my art - what was to become of it?  Would I continue to pursue it?  The questions at the time surprised me because I had always kind of thought that he was sort of iconoclastic as well, and I thought that he'd be saying what a good thing this was.  But he wasn't.  As I fumbled and bumbled about why I was essentially giving up on artwork he made a comment that I'll never forget: he said, "You might be surprised that God may turn around and use your artwork."  When he said it I literally thought, "You have no idea how wrong you are" - I was completely convinced that he didn't have a clue as to what he was talking about. 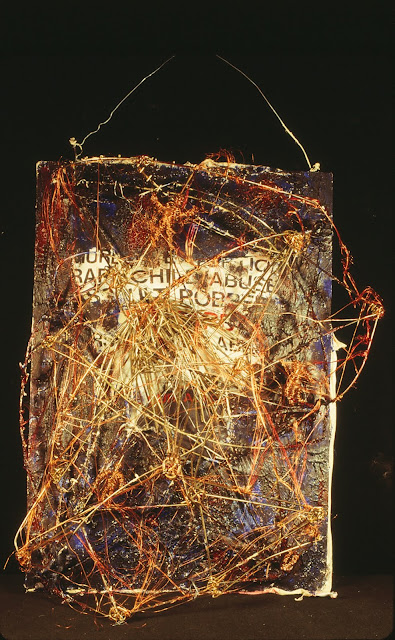 My pastor turned out to be right.  As soon as I started seminary and told people what my undergraduate degree was in (as people are oft to share first meeting each other in an academic situation) people immediately wanted to know more about my art and see more of it.  Not a month or so in to starting the first full trimester I was asked to show some artwork at a chapel session as part of a session called "Artists Among Us."  I showed an assemblage piece that I had done in college called 'The Tangle of Sin' - a piece of particle board with a slew of metal and paint spewing off of it.  A fellow student (who was pastoring a church in south Minneapolis) came up to me afterwards and asked what I was doing with the sculpture.  I told him that I was collecting dust with it.  He asked me if he could hang it in his church to which I said 'yes,' but thought "Why would you want to hang this stupid thing there?"

I brought it over to his apartment and then spoke to him again the next week.  He asked me if I would come down and be a part of his church - as a youth pastor . The thought of me as a youth pastor was pretty hilarious I thought, but I wanted a challenge.  Challenge wasn't even the right word for it.  Three years later, having done both my practicum internship and my professional internships at the church, having spent some time with the most amazing possible people and gaining some of the most valuable experiences I'll ever gain in life, I can see that without that connection being made through the assemblage piece none of that would have happened - I know it.

As I've started doing more and more artwork again I have starting going full circle again: why am I making art at all?  Honestly a lot of it feels like a total waste of time: eventually it's all going to be gone - destroyed - somehow by something.  None of it is permanent - and I can't bring it with me when I'm gone.  So what's the point of creating temporal art that will eventually be gone?  Am I pursuing another spark to a huge life changing experience like with my church in Minneapolis?  What happens if no one sees the work that I'm doing or if it gets destroyed before I finish it?  Did it still have value if it helped me express something?  Or is it all simply a waste of time that I could have been doing something else - something better or something with an actual tangible value?  It's good for me to remember Pastor's words: "You might be surprised that God may turn around and use your artwork."  Right about now I could use some more surprises.
Posted by Aemiessence Fine Arts

Email ThisBlogThis!Share to TwitterShare to FacebookShare to Pinterest
Labels: Writing: Thoughts on Art